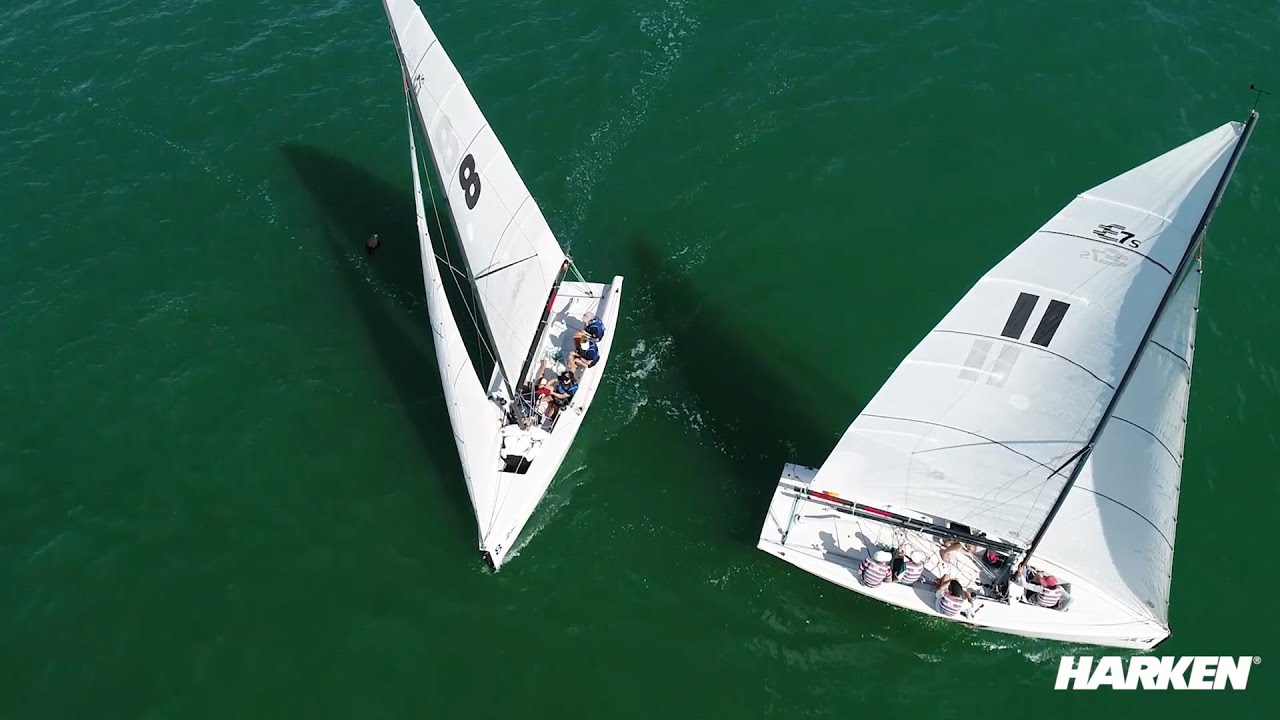 The 2022 Harken New Zealand National Secondary Schools Keelboat Championships after movie is here! This year’s event was a fantastic 3 days of sailing out of the Royal New Zealand Yacht Squadron, showcasing the talented next generation of Kiwi sailors in high school and exposing them to larger Keelboat sailing competitions.

This event has gone from strength to strength, with a full 20 boat fleet this year – and each and every sailor had a great time learning new skills aboard the Elliott 7s, creating connections with their fellow sailors, and enjoying a few beautiful days on the Waitemata Harbour. 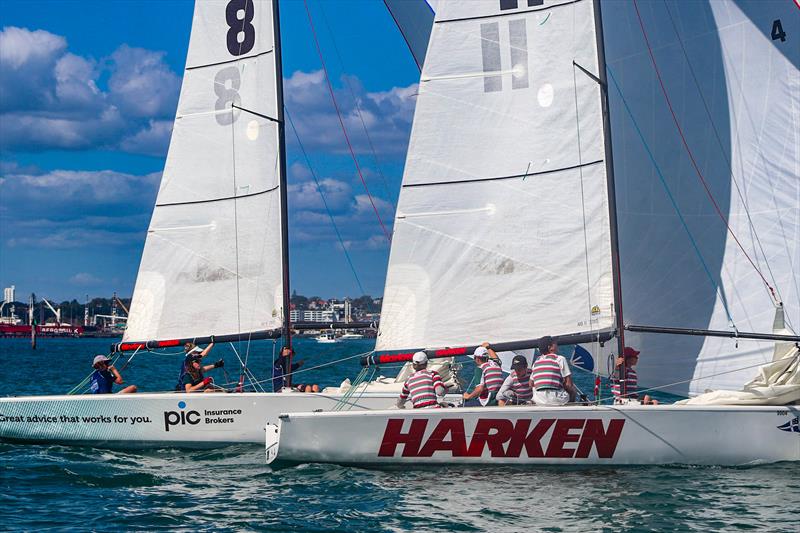 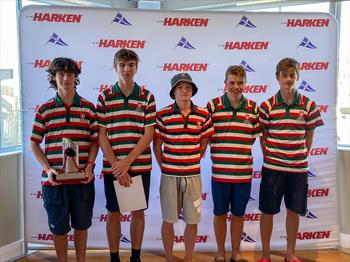 However a new skipper’s name will be on the title with Lucas Day and his Westlake Red crew of Robbie Woolridge, Levi Jenkins, Josh Hilder and Sam Clarke taking out the weekend over 19 other teams, including last year’s champions in the Westlake Green team.

The Red crew is made up of younger students, so beating out their older counterparts was just that much sweeter for the crew thrown together a week before the event.

“We had some challenging conditions all weekend, so we just kept things simple and consistent for Finals and performed when it counted” said a stoked Lucas.

The Gold Fleet racing was almost wrapped up after two races, with the Nelson College Combined team taking out two victories in the first two races to put them in prime position. However, a mid-fleet finish in Race 3 and a disqualification for crossing the start line too early opened the gap that Day and his Westlake Red crew were more than happy to jump into to take this year’s title back to its familiar home on the North Shore.

With 200 high school sailors taking to the water over the weekend, there was plenty of exciting racing and many close finishes, especially in the final races of both fleets with many of the final placings being decided by mere centimeters. 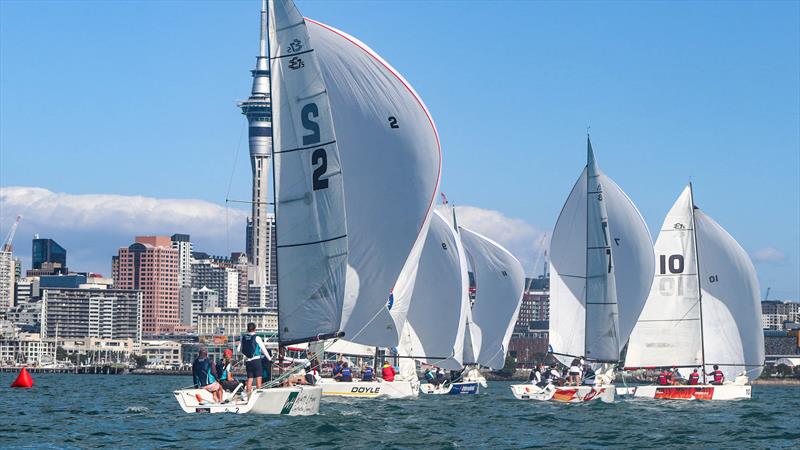 Westlake Red and the runners up Saint Kentigern College team stayed within touching distance going into the final race, with both teams tied on 10 points while the Nelson Combined team sat with a 2 point lead. However, with their disqualification from the final race alongside the Kerikeri Blue ream, both boats were put into a one race sprint that decided the champion. Day and his crew were able to manage the nerves and the light winds to claim only their second win of the weekend, but the one that mattered the most in the end.

Both of the top seeds from the qualification racing, Kristin School and Auckland Grammar School, had tough starts to the day with a 7th and a 8th respectively to start off their championship campaign. Kristin was able to find their consistency again, posting a 2nd and 3rd place in the finals to claim 3rd overall. The Grammar crew, coming of an Auckland Teams Racing Championship last weekend in double-handed dinghy’s, seemed to struggle with the lighter conditions. However, they found their form from Saturday to claim a win in the 3rd race when the breeze was strongest on finals day.

The Silver Fleet finals showed some excellent racing throughout the afternoon, with plenty of tight races and huge improvements from across the crews. The Silver Fleet title was won by King’s College, helmed by Sam Scott, who didn’t live up to their own expectations on day 1 but returned with a vengeance for finals. The Whangarei Boys High School team won three out of the four races but hamstrung themselves with a last place finish and their worst performance of the weekend to start their Sunday campaign, losing out by one point to the incredibly consistent King’s crew. 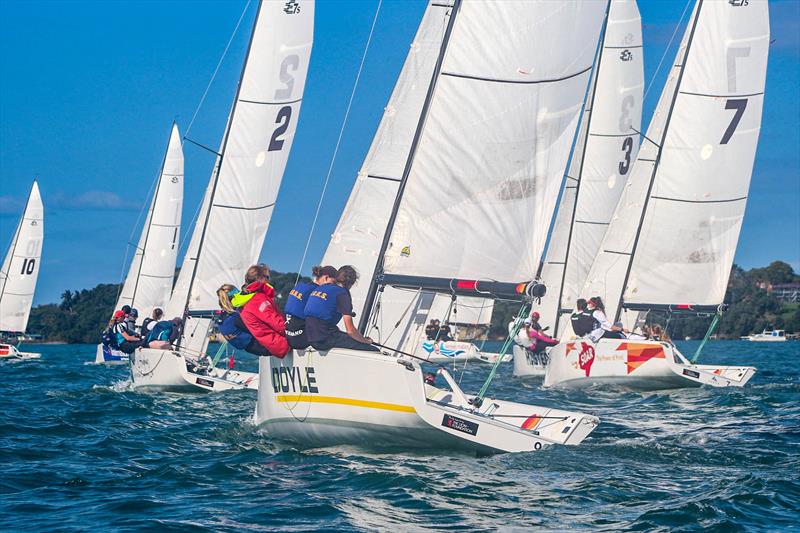 “We weren’t happy with our performances on Friday in the light winds, and we had a few incidents where we were stuck on the pin” said Scott. “However, we put that behind us and came out with more energy and found our consistency, which carried us through the day”.

“I couldn’t be happier with how the weekend has gone – for many of these kids coming from single or double handed dinghy sailing this is the only chance they get to sail for their school in a boat this size”, said RNZYS Head Coach Reuben Corbett. “It’s always encouraging to see fresh faces travelling from across the country and a full competition – this is the first time we’ve had a full 20 teams and we even had to turn away a few which is unheard of!”.

Day 1 saw a search for wind to start the day – with the forecasted light breeze not eventuating and falling off after one race was completed, race 1 took an hour to complete with two teams unable to finish within the time limit. However, waiting after an hour on the water only light zephyrs teased the race committee and crews alike. More consistent breezes was found inside of the Harbour Bridge, and the Kristin crew continued where they left off, with consistently excellent boat handling in the light wind and were able to take out the first two races with relative ease while other crews had to work out the shifty conditions blowing in from the southwest. Race 1 saw the young Westlake Red squad and Michael Park School’s crew have excellent light wind performances, with Race 2 seeing Kristin challenged by a Takapuna Grammar Yellow crew that showed flashes of brilliance throughout the day. 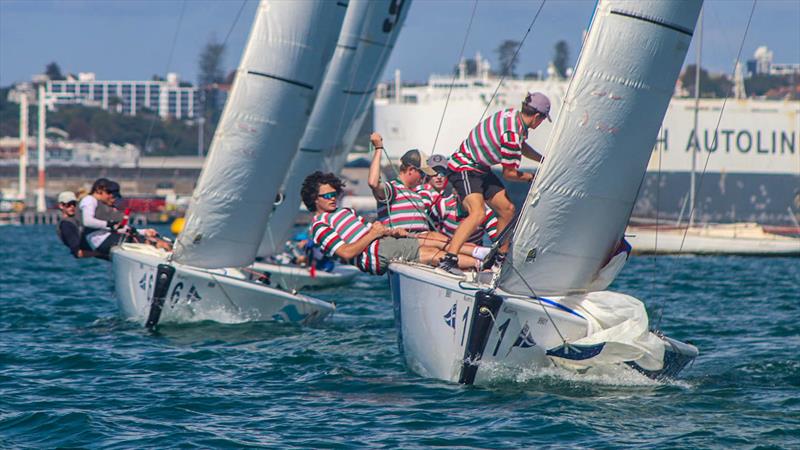 After an unexpectedly slow start to the day with two 4th place finishes and being beaten by their younger Westlake Red counterparts in both, the defending champions Westlake Green came to life in Race 3 and were able to keep the fast-finishing Sacred Heart boat at bay. However, normal service resumed as Kristin started brilliantly off the pin side of the racecourse and were able to run away from the rest of the field by the time they reached the top mark for their third win of the day and essentially booking their ticket into the Gold Fleet.

The Westlake Green crew were able take second, from another good Takapuna performance and a Whangarei Boys crew that gained in confidence and consistency throughout the day. A divide in the teams eventuated, with the Kings College, Michael Park and both Diocesan crews using their Day 1 racing as an opportunity to work on their communication, boat handling and sailing techniques for their Sunday racing as part of the Silver Fleet. However, each of the crews were able to find much more consistent sailing and were able to find their way up the pecking order towards the end of Day 1.

Misjudgments in tactics in the shifty conditions saw leaders tumble down the fleet for the final two races of the day, turning them into crucial openings for the chasing pack to try and stake their claim to the coveted final spots in the Gold Fleet. Westlake Red held their nerve and sailed one of the best races of the day in Race 5 to book their ticket, while Whangarei Boys had their best result of the day with a big 2nd place that gave them a shot at snatching one of the final two spots in the top five. 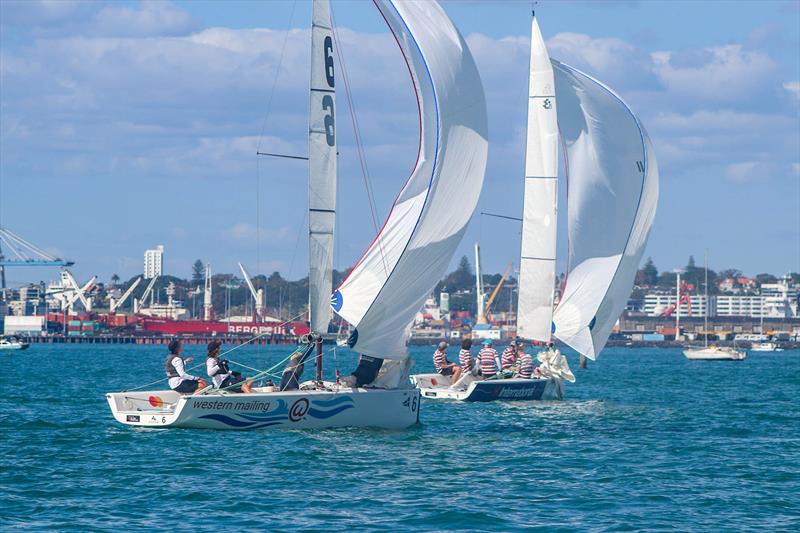 However, it wasn’t to be for the Whangarei team as Sacred Heart pulled out all the stops to win the final race and secure 4th, while Takapuna just did enough to tie with Whangarei on points and qualify due to their second best result on the day being a 3rd, compared to Whangarei’s 4th.

The Silver Fleet winning King’s College team in hiking action, keeping Kerikeri High School behind their stern – William Woodworth/RNZYS Day 2 saw 10 brand new crews take to the water for their qualification day, and the Auckland Grammar crew sent a message early and matched Kristin’s Day 1 feat with three wins and a 3rd place in the first four races. However, the rest of the crew’s had some excellent battles, with Glendowie College, Nelson Colleges Combined and Kerikeri Blue emerging as the chasing pack. A few early tough starts for Otumoetai College, Whangarei Girls, Nelson Colllege Girls and Takapuna Blue saw them fighting from behind. The Otumoetai and Whangarei crews were able to find some good pressure and made their way up the field in Race 2 as Nelson Colleges Combined, Kerikeri Red and St Kentigern stumbled.

However, the Nelson Colleges Combined team were able to get off to a flying start in Race 3, and the Glendowie and Grammar crews couldn’t get close enough to strike as they picked up their first win of the day. However, the consistency of Grammar, Glendowie, Nelson Combined and a race 5 victory for Kerikeri Blue saw these four teams qualify before the final race of the day. The Saint Kentigern crew found form throughout the middle of the day, with a 4th and two 3rd’s catapulting them into the final available spot for Gold Fleet qualification. 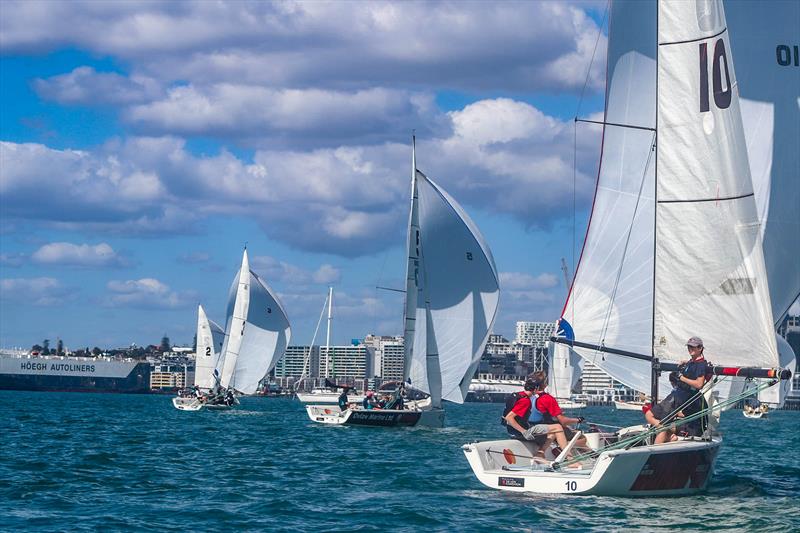 However, disaster struck for the Nelson College for Girls and Saint Kentigern crews in the crucial final race of the day, where they were called for being over the line at the start. The Saint Kentigern crew had a 6 point buffer over a consistently improving Kerikeri Red crew, and with a good result they could jump into the 5th Gold Fleet spot. Very tight racing around the at the final turn saw a few protests green flagged, and a mistake with the spinnaker for the Grammar crew opened the door for Otumoetai to emerge from a drag race and take the final win of the day – an incredible result for a stoked crew and supporters on the water. The Kerikeri Red team came home in 3rd, with Saint Kentigern finishing 9th. Just like Day 1 with Takapuna and Whangarei however, St Kent’s qualified with having a better 4th result on countback over the Kerikeri Red crew.

All of the crews were able to develop as sailors, be exposed to larger keelboat sailing and take some incredible lessons away – with many of the sailors including champion skipper Day able to have another go at the Harken National Secondary Schools Keelboat Championship this weekend couldn’t have been more of a success. 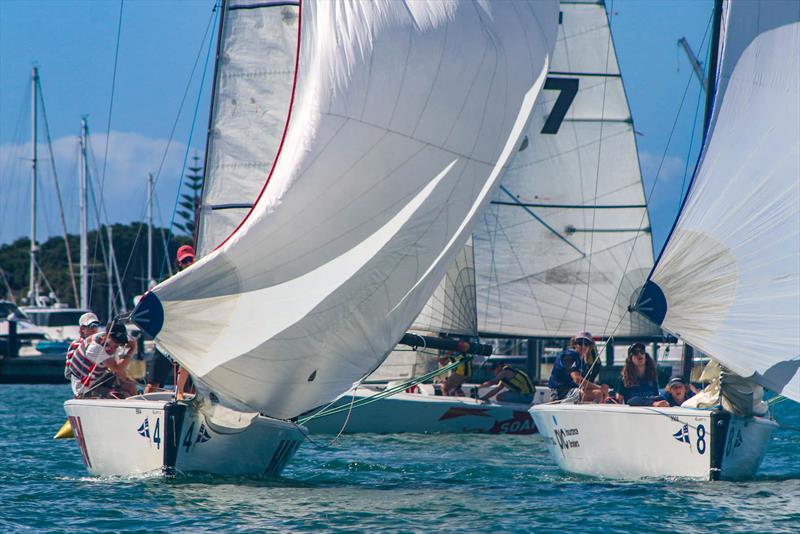 A huge thank you from the RNZYS to all of the sailors, Race Committee, volunteers, coaches and parents that helped make this weekend a resounding success – the last two weekends of high school sailing in Auckland have been fantastic to see and seeing the continued expansion of Secondary Schools sailing around the country is a incredibly hopeful sign for the sport in New Zealand.

“We’ll definitely be back to defend our title next year and try bring home a threepeat to Westlake” says Day – and they will take some beating to wrestle the title away from them in 2023.

“The Harken,” as it is known in youth match racing circles worldwide, stands out as one of the